The itinerary we suggest allows you to discover the mysteries of the ancient Etruscan civilization, crossing streets carved into the tuff that connect, like in a magic triangle, the hamlets of Sovana, Sorano and Pitigliano, in the greenery of Maremma.

This is an excursion focused on a lesser known part of Tuscany, characterized by these fortified hamlets, lava stone houses and valleys carved into the tuff by the rivers.

The description of the route

This is a 26 kilometer loop itinerary, with departure and return in Sovana. From the town square you go towards the SP 22 route near the Rocca Aldobrandesca.

Then, you will proceed to the beginning of the descent near the necropolis of San Rocco that ends near the bridge on the river Lente. Here begins the climb to the heart of Sorano, along a spectacular road dug into the tuff stone. After a visit to the historic center, the itinerary continues towards Pitigliano, which can be reached downhill after a short uphill stretch to reach San Quirico.

Here you can choose if visiting the historic center or continue straight and go down facing a series of hairpin bends until the junction leading to Sovana. After crossing the bridge on the Lente, go up for about 4 kilometers to the intersection with the road SP 22 which, downhill, leads back to our starting point.

The path winds on paved roads, suitable for a Superleggera bike. The most challenging stretch of the route is the short climb towards Sorano. 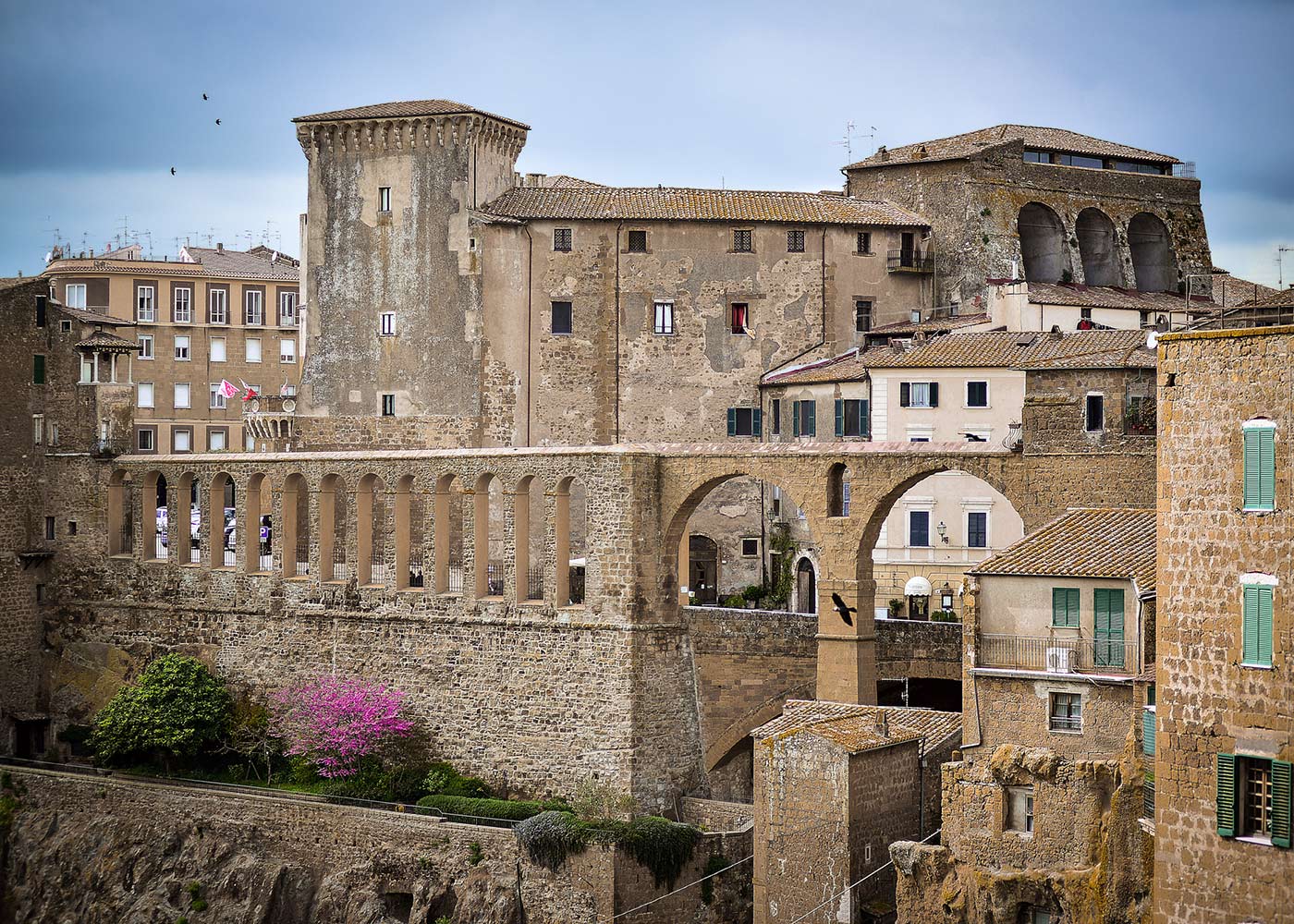 Perched on a cliff of tuff, the town stands majestically on the valleys of the torrents Meleta, Prochio and Lente. Also known as “La Piccola Gerusalemme”, due to the historical presence of a Jewish community, Pitigliano is one of the most charming hamlets in Tuscany: it houses palaces and buildings of historical value among its narrow alleys, squares and panoramic views.

Don’t miss to visit the Orsini Palace, an ancient fortified dwelling dating back to 1823. We recommend also the Medici Aqueduct, a peculiar construction designed for water supply, built at the behest of the Orsini family.

Among the other must-see spots, there are the Jewish Ghetto, an ancient neighborhood founded by the Jewish community that lived in Pitigliano from the end of the XVI century, and some churches, such as the Church of San Rocco (the oldest building in the village), the Sanctuary of the “Madonna delle Grazie”, which offers an amazing view, the Cathedral of Saints Peter and Paul. The findings of the first Etruscan settlement are preserved in the Archaeological Museum of Etruscan Civilization. 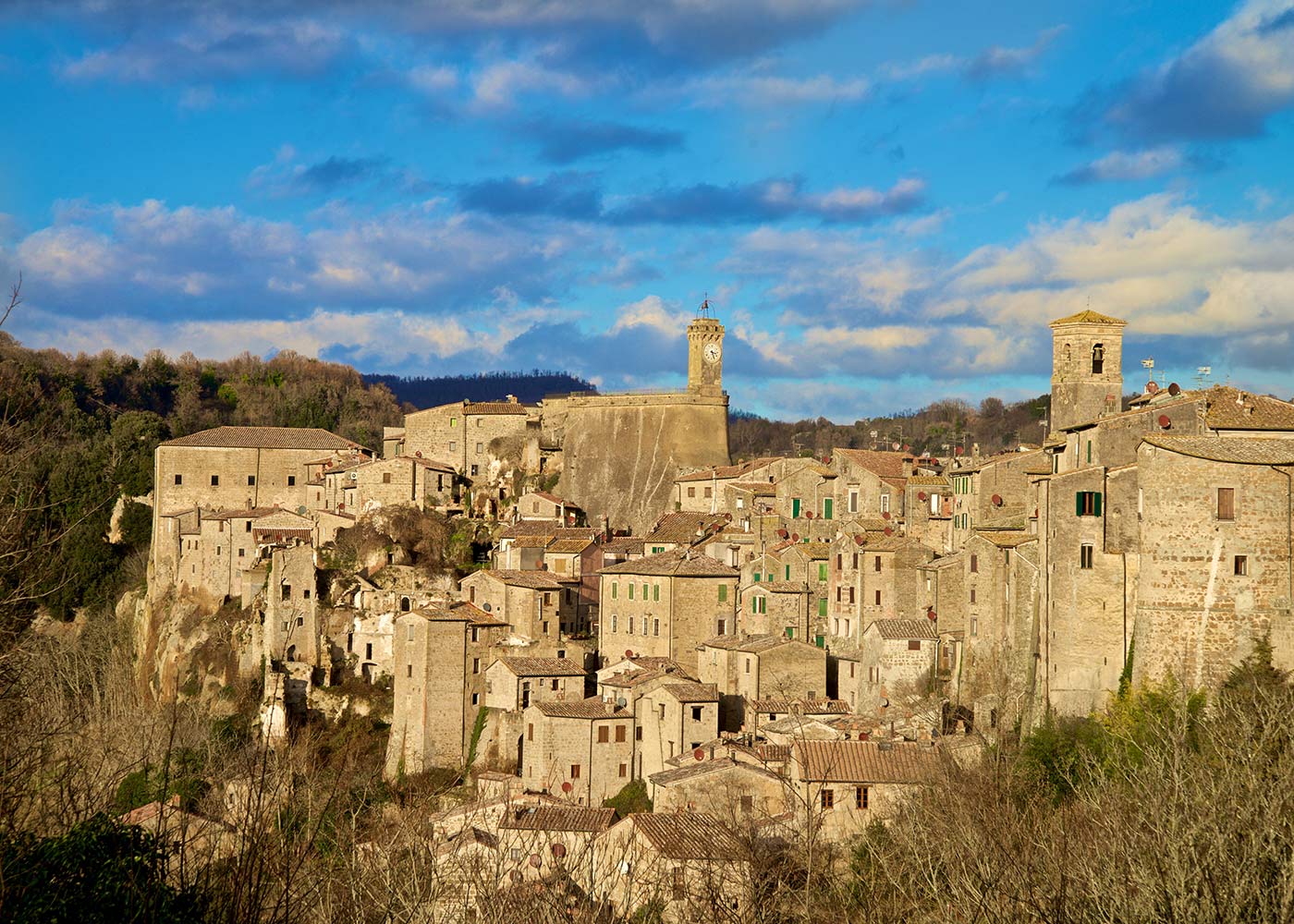 This picturesque town placed on a cliff of volcanic tuff overlooks the valley of the river Lente. Because of its particular urban structure, characterized by numerous houses and buildings dug into the tufa, the hamlet is nicknamed the “Matera of Tuscany”.

Already inhabited in the Etruscan period, the historic heart of Sorano, with narrow streets, bridges and arches, is dominated by the Orsini Fortress: an imposing fortification dating back to 1552 whose undergrounds are a labyrinth of galleries, some of which date back to the Etruscan age.

Near the fortress you can see the Masso Leopoldino, a large tuff stone with hand-polished walls; on its summit there is a sort of panoramic terrace. Other important buildings are the rock complex of San Rocco and the Collegiate Church of San Nicola, dating back to XIII century.

Sovana and the Etruscan Necropolises

Sovana is located in the characteristic scenery of the Archaeological Park of Città del Tufo, in a valley between the hills of Fiora and Albegna. Its historic center has preserved the appearance of a medieval hamlet, testified to by Palazzo Pretorio and Palazzo dell’Archivio, which overlook the central square, and the Rocca Aldobrandesca (XI century).

Sovana also preserves pieces of the ancient city walls and has many important religious buildings, such as the Church of Santa Maria Maggiore, the Duomo, one of the most important Gothic-style buildings in Tuscany, and the early Christian church of San Mamiliano, one of the oldest buildings in town. The Etruscan necropolises are an incredible heritage, immersed in the Maremma greenery. One of the must-sees is the monumental Tomb Ildebranda. 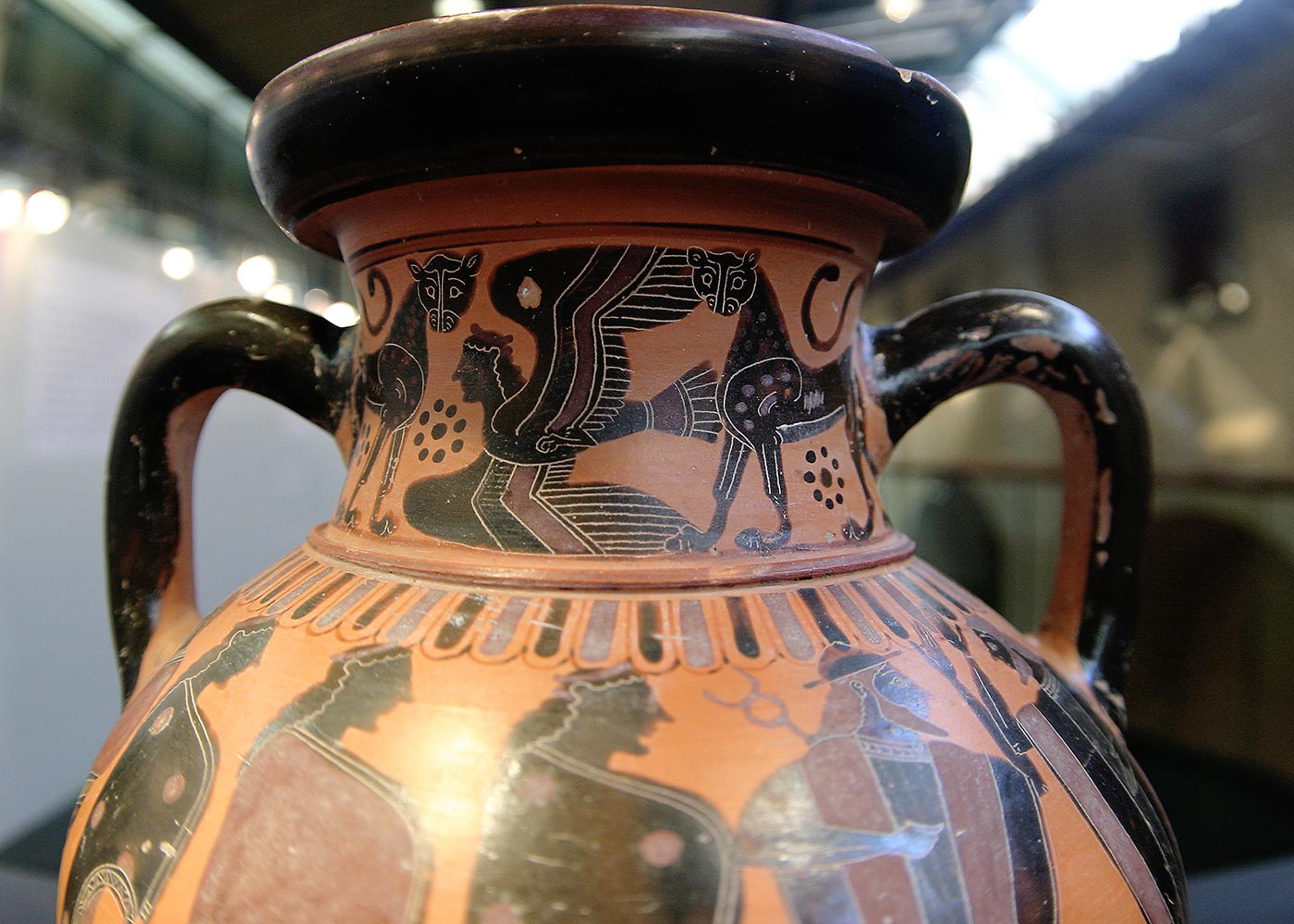 In the territory between Sovana, Pitigliano and Sorano there are charming passages created in the bare rock by the Etruscans.

The tunnels, dug in the tuff hills, connect necropolises and ancient settlements: unique works in the world that today are the symbol of the Archaeological Park of Città del Tufo, where there are the main cultural, historical and archaeological treasures of the territory.

The paths, often tortuous and steep, are deeply dug in the rock, between walls of tuff stone even more than twenty meters high. The Vie Cave di Sorano and Sovana lead us to the discovery of some remarkable Etruscan necropolises.

Type of Itinerary: half a day

bike itineraries in Tuscany, Cities of Tuff in Tuscany 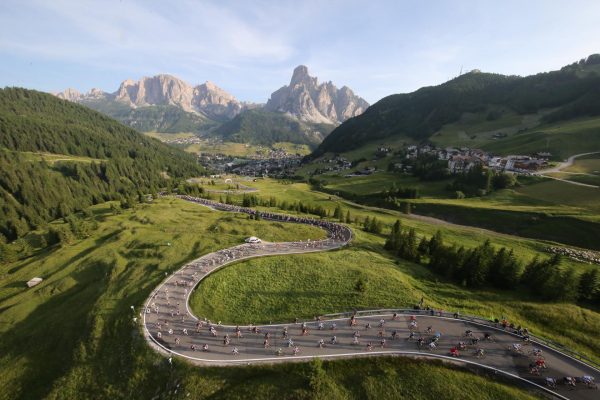 Cycling in the Dolomites: a 6-days itinerary in Alta Badia